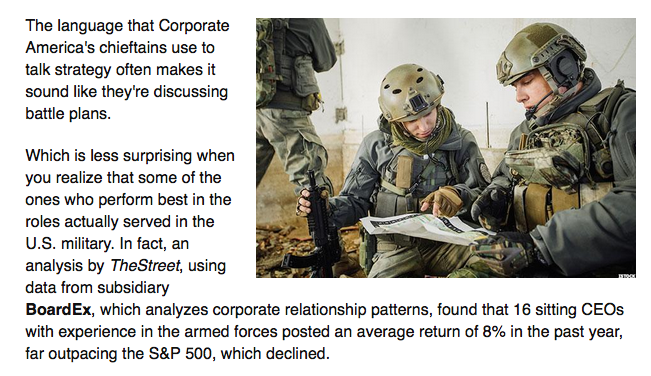 The language that Corporate America’s chieftains use to talk strategy often makes it sound like they’re discussing battle plans.

Which is less surprising when you realize that some of the ones who perform best in the roles actually served in the U.S. military. In fact, an analysis by TheStreet, using data from subsidiary BoardEx, which analyzes corporate relationship patterns, found that 16 sitting CEOs with experience in the armed forces posted an average return of 8% in the past year, far outpacing the S&P 500, which declined.

Like the S&P, the returns aren’t even: Some gained much more than 8% in the period, while others declined. The benefits of military training extend beyond the purely financial, however. Executives with such training are less likely to be involved in corporate fraud, are usually fiscally conservative and perform better under stress, according to a working paper from the National Bureau of Economic Research.

Teamwork, discipline, a focus on long-term viability and the ability to navigate uncertain terrain are also assets.

“If you’re not comfortable today with ambiguity, you’re in a lot of trouble as a leader,” said Erica Peitler, a leadership performance coach who runs her own consulting firm. Leadership trainers today often use the acronym VUCA, derived from military jargon, which refers to volatility, uncertainty, complexity and ambiguity.

“You can understand why military professionals are trained for a ‘VUCA’ world,” she said. “We’ve now taken that into the corporate world because that’s what we are dealing with now, as well.”